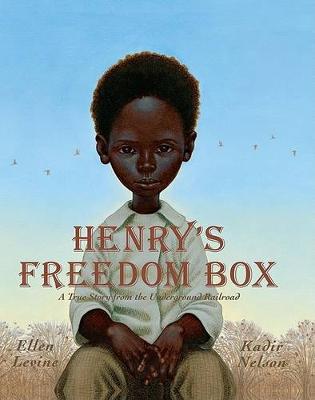 Reviews
Great for age 3-18 years
A stirring, dramatic story of a slave who mails himself to freedom by a Jane Addams Peace Award-winning author and a Coretta Scott King Award-winning artist.Henry Brown doesn't know how old he is. Nobody keeps records of slaves' birthdays. All the time he dreams about freedom, but that dream seems farther away than ever when he is torn from his family and put to work in a warehouse. Henry grows up and marries, but he is again devastated when his family is sold at the slave market. Then one day, as he lifts a crate at the warehouse, he knows exactly what he must do: He will mail himself to the North. After an arduous journey in the crate, Henry finally has a birthday -- his first day of freedom.

There are 40 pages in this book. This is a picture book. A picture book uses pictures and text to tell the story. The number of words varies from zero ('wordless') to around 1k over 32 pages. Picture books are typically aimed at young readers (age 3-6) but can also be aimed at older children (7+). This book was published 2007 by Scholastic US .

"Real heroes," Levine says, "aren't necessarily on TV or in the news. They can be ordinarypeople who are willing to take risks for causes they believe in. Nonfiction offers a way tointroduce young readers to real people who have shown tremendous courage, even when facedwith great danger. All of us have the potential. And one doesn't have to be a grown-up," sheadds.