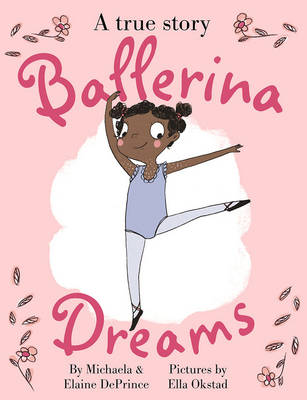 Reviews
One windy day, a magazine blew down the road. I reached out and caught it. A pretty picture of a woman was on the front cover of the magazine. She wore a short pink dress that stuck out around her in a circle. She looked very happy. At the age of three, Michaela DePrince found a photo of a ballerina that changed her life. She was living in an orphanage in Sierra Leone at the time, but was soon adopted by a family and brought to America. Michaela never forgot the photo of the dancer she once saw, and decided to make her dream of becoming a ballerina come true. She has been dancing ever since, and after a spell as a principal dancer in New York, now dances for the Dutch National Ballet in Amsterdam. Beautifully and gently illustrated by Ella Okstad, Ballerina Dreams is the younger-reader edition of Michaela DePrince's highly moving memoir, Hope in a Ballet Shoe.

Michaela DePrince was born in 1995 in Sierra Leone. After the deaths of her parents, she moved to an orphanage from which she was adopted and taken to the US in 1999. Elaine DePrince, her new mother, noticed Michaela's obsession with ballet and allowed her to begin lessons. Michaela is now a professional ballerina, who danced principal with The Dance Theatre of Harlem, in guest principal roles in South Africa and the Netherlands. She now dances with the Dutch National Ballet. Ella Okstad loves to draw ghosts, vampires, humans, cats, and all sorts of creatures. She lives and works as an illustrator in Trondheim, Norway. When she's not in her office creating scary, cute, or peculiar creatures for books, she enjoys spending time with her husband, three boys, and a cat. Visit her at Okstad. com.