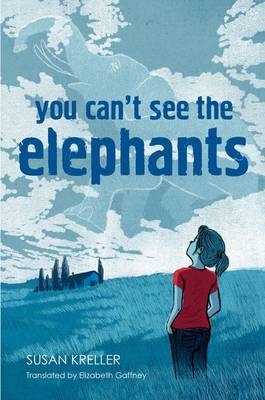 You Can't See the Elephants

When thirteen-year-old Mascha is sent to her grandparents' for the summer, she spends her days bored and lonely at a nearby playground. There she meets Julia and Max, two young siblings who are incredibly shy and withdrawn. Mascha soon begins to suspect that they are being physically abused by their father, a prominent member of their small community. She tells her grandparents and the authorities, but they all refuse to believe her.

Mascha can't let the abuse go on, so she takes matters into her own hands. Already an international award winner, this beautifully written novel is a haunting and timely tale.

This book has been graded for interest at 10-12 years.

There are 192 pages in this book. This book was published 2016 by Penguin Putnam Inc .

Susan Kreller is a freelance journalist and writer. She has been nominated for the German Children's Literature Award twice and has won the Kranichsteiner literary prize. You Can't See the Elephants ( Elefanten sieht man nicht ), her debut novel, is already the winner of seven international awards and has been translated into six languages. Elizabeth Gaffney, a native Brooklynite, studied philosophy and German at Ludwig-Maximillian University in Munich. She is the author of the novels When the World Was Young and Metropolis.

Siblings in fiction
Physical And Emotional Abuse in fiction