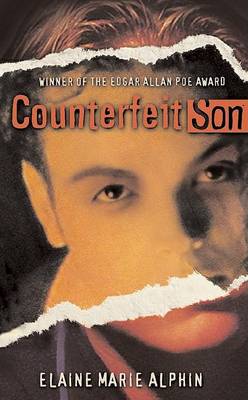 Reviews
Great for age 12-18 years
An engrossing, suspenseful novel that is sure to keep the reader glued to the page. (Kirkus Reviews) Cameron Miller is the son of a murderer. All he has ever known is the stench of the locked cellar, where he can hear the blows and cries and his father's torrent of terror and abuse. Then a miracle happens: his father is killed in a police shootout. In the aftermath, Cameron grabs his one chance for a normal life: he takes on the identity of Neil Lacey, a boy who Mr. Miller had abducted six years ago. As Neil, he has a life with loving parents, a brother and sister, and the comforts only money can buy. But someone knows what Cameron's doingsomeone with the power to turn his life back into a nightmare.

There are 180 pages in this book. This book was published 2002 by Puffin Books .

ELAINE MARIE ALPHIN is the author of Counterfeit Son, which received the 2001 Edgar Allan Poe Award for Best Young Adult Mystery. She lives in Indiana.