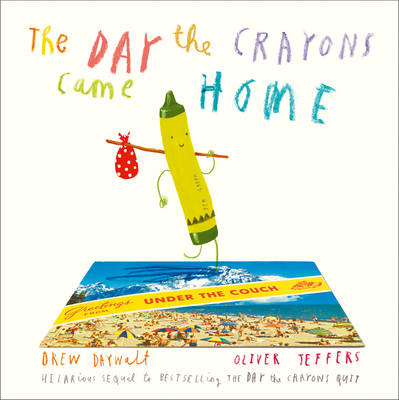 The hilarious sequel to the prize-winning, international bestseller The Day the Crayons Quit, now available in this toddler-friendly board book format!

Watch out - the crayons are back and they're crosser than ever!

One day Duncan receives a set of postcards from his crayons who have been lost, forgotten, broken - even melted in a clothes dryer and stuck to a sock!

A hilarious text and joyful illustrations combine to show that crayons have feelings too in this laugh-out-loud sequel to bestselling picture book The Day the Crayons Quit.

There are 38 pages in this book. This is a picture book. A picture book uses pictures and text to tell the story. The number of words varies from zero ('wordless') to around 1k over 32 pages. Picture books are typically aimed at young readers (age 3-6) but can also be aimed at older children (7+). This book was published 2017 by HarperCollins Publishers .

Oliver Jeffers' outstanding talent has been recognised by several high-profile awards, including the Nestle Children's Book Prize Gold Award. `Lost and Found' animation was broadcast on Channel 4. Oliver lives and works in Brookyln, New York. Drew Daywalt is an award-winning writer/director of film and TV, his work featured on Disney, MTV, FEARnet and Syfy. He lives in Southern California.