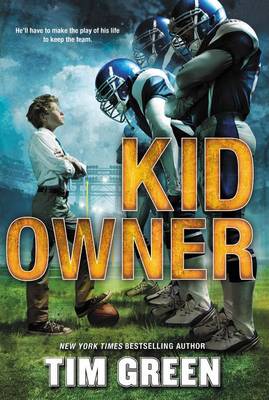 From New York Times bestselling author and former NFL player Tim Green comes a riveting stand-alone football novel about being a leader and finding your inner strength. Perfect for fans of Mike Lupica.

When Ryan's estranged father unexpectedly dies, Ryan learns that he has inherited the Dallas Cowboys football team. With his new role as owner of this NFL team, Ryan has high hopes that he can be more than just a middle school misfit. Maybe he can even get off the bench and into the starting lineup of his own football team.

With the help of his friends Jackson and Izzy, Ryan takes advantage of his newfound stardom. He convinces his coach to use a tricky passing offense that plays to Ryan's strengths. But just when things are looking up, Ryan's nasty stepmother makes a legal play to make her own son the Cowboys' kid owner. With drama heating up both on and off the field, Ryan quickly realizes he may lose much more than just the Dallas Cowboys.

There are 352 pages in this book. This book was published 2016 by HarperCollins Publishers Inc .

Blended Families in fiction
Baseball And Softball in fiction