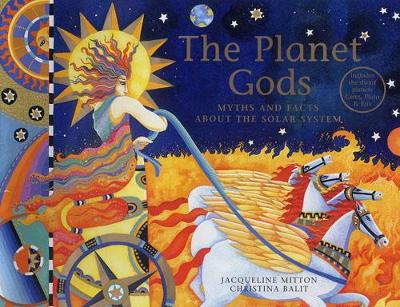 Reviews
A child's introduction to the planets in our solar system, written by a lecturer on astronomy. Dr Jacqueline Mitton describes each planet, drawing on scientific information. She also discusses the gods that the planets are named after, and examines the relationships between the contemporary facts and the ancient myths. Punctuated by Christina Balit's illustrations, this volume draws on the ancients' fascination with the universe to offer an exploration of the planets. Now updated with the latest facts and figures about the Solar System including dwarf planets.

There are 32 pages in this book. This book was published 2008 by Frances Lincoln Publishers Ltd .

Dr. Jacqueline Mitton holds an M. A. in physics from the University of Oxford and a Ph. D. in astrophysics from the University of Cambridge. She works as a Public Relations Officer for the Royal Astronomical Society in England. She is the author of several books for children including Zoo in the Sky: A Book of Animal Constellations. Asteroid 4027 was named Mitton for Dr. Mitton and her husband, astronomer Simon Mitton. She lives in England. CHRISTINA BALIT studied at Chelsea School of Art and the Royal College of Art. In 1982 she won a Thames Television Travelling Design Bursary and illustrated Report to Greco by Niko Kazantisakis. She has exhibited widely and is also a playwright.