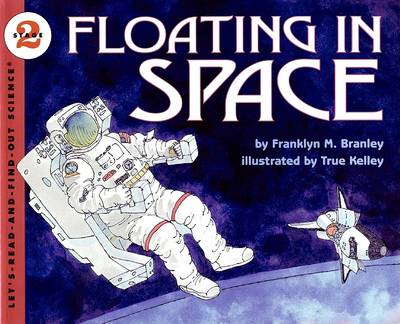 Reviews
Great for age 5-10 years
Have you ever dreamed of being an astronaut? Wondered what it might be like to see the sun set sixteen times in one day? Open this book and be transported on an information-packed voyage aboard the space shuttle. True Kelley kid-friendly diagrams and illustrations and Franklyn Branley's straightforward text reveal what astronauts eat, how they move, and what kinds of work they do in space.

There are 32 pages in this book. This book was published 1997 by HarperCollins Publishers Inc .

True Kelley has illustrated many favorite books for children in her fun-filled watercolor style, including several in the Let's-Read-and-Find-Out Science series. She and the author previously collaborated on What Makes a Magnet? and What the Moon is Like? True Kelley lives in Warner, New Hampshire. Franklyn M. Branley was the originator of the Let's-Read-and-Find-Out Science series and the author of close to 150 popular books about scientific topics for young readers of all ages. He was Astronomer Emeritus and former Chairman of the American Museum of Natural History-Hayden Planetarium. Michael Rex learned to draw in Chatham, New Jersey, and studied at the School of Visual Arts in New York City. Who Digs? and Who Builds? are his first two books with HarperCollins. Mr. Rex lives in Brooklyn, New York.