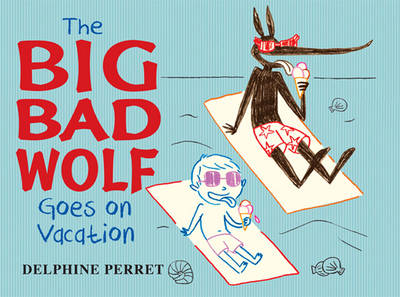 Reviews
Great for age 3-6 years
The Big Bad Wolf is back and funnier than ever! Doesn't a wolf deserve a holiday, too? Bernard, the clever, cookie-munching hero of Delphine Perret's award-winning book, certainly thinks so. So when he learns that his pal Louis is vacationing by the sea with his grandpa, Bernard wants to go too. This much-anticipated sequel to the award-winning The Big Bad Wolf and Me is every bit as delightful as the first.

This book was recognised in the Picture Book category by the Parents' Choice Award.

There are 64 pages in this book. This is a picture book. A picture book uses pictures and text to tell the story. The number of words varies from zero ('wordless') to around 1k over 32 pages. Picture books are typically aimed at young readers (age 3-6) but can also be aimed at older children (7+). This book was published 2013 by Sterling Publishing Co Inc .

Delphine Perret is the author-illustrator of more than a dozen titles translated in several languages. She lives in Lyon, France where she co-founded an art gallery.