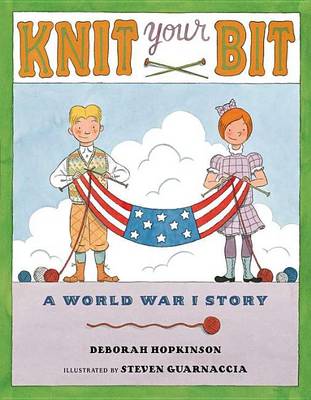 Knit Your Bit: A World War I Story

Reviews
Great for age 5-9 years
Knit Your Bit Based on a real "Knit-In"" event at Central Park in 1918, where young girls challenged the boys to a knitting competition to supply clothing for American troops during World War I, ""Knit Your Bit"" shows readers that making a lasting contribution is as easy as trying something new! . "

There are 32 pages in this book. This book was published 2013 by Penguin Putnam Inc .

Steven Guarnaccia is the chair of the Illustration Program at Parsons The New School for Design in New York City. His art has appeared in many national and international magazines. Deborah Hopkinson's most recent book is the ALA Award-Winning Apples to Oregon . Her other titles include Under the Quilt of NIght (Also illustrated by James E. Ransome) and Fannie in the Kitchen . She lives in Oregon.