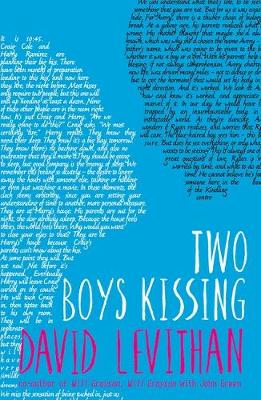 From the New York Times best-selling author of Every Day, another thoughtful and original perspective on relationships.

2014 Lambda literary award winner and 2014 Stonewall Honor Book, Two Boys Kissing explores how people fall in and out of love, and what is means to discover yourself.

The two boys kissing are Craig and Harry. They're hoping to set the world record for the longest kiss. They're not a couple, but they used to be.

Peter and Neil are a couple. Their kisses are different. Avery and Ryan have only just met and are trying to figure out what happens next. Cooper is alone. He's not sure how he feels.

As the marathon progresses, these boys, their friends and families evaluate the changing nature of feelings, behaviour and this crazy thing called love under the watchful eyes of a Greek chorus of a generation of men lost to AIDS. David Levithan connects recent history with the present moment in a novel that is both a celebration of equality and a memorial to a lost generation.

David is the New York Times best-selling author of Boy Meets Boy and Marly's Ghost. While among his many collaborations are Will Grayson, Will Grayson with Fault in Our Stars author John Green, and Nick and Norah's Infinite Playlist with Rachel Cohn, which became a major film. David's latest collaboration with Rachel, The Twelve Days of Dash and Lily, was picked by Zoella for her Book Club with WHSmiths. Tiny Cooper from Will Grayson, Will Grayson, now has his own novel: Hold Me Closer: The Tiny Cooper Story. David is also a highly respected children's book editor, whose list includes many luminaries of children's literature, including Garth Nix, Libba Bray and Suzanne Collins. He lives and works in New York.

Praise for Every Day:

`Every Day is a wonder.' Patrick Ness, author of Chaos Walking trilogy and A Monster Calls

Rachel Cohn and David Levithan are New York Times bestselling authors of YA fiction. They have co-written three books including Nick & Nora's Infinite Playlist which was adapted for a film in 2008.

Inky Award
This book was recognised in the Silver Inky category by the Inky Award.