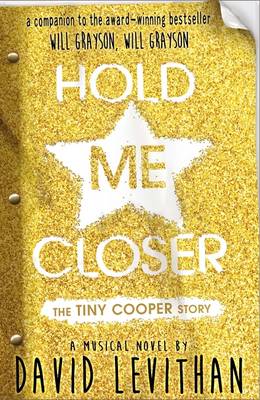 Larger-than-life character Tiny Cooper, from the bestselling novel Will Grayson, Will Grayson, finally tells his own story the only way he knows how - as a stupendous musical.

This is the full script of Hold Me Closer, the musical written by and staring Tiny Cooper, from the New York Times bestselling novel Will Grayson, Will Grayson, written by David Levithan and John Green. Filled with humour, pain, and 'big, lively, belty' musical numbers, readers will finally learn the full story of Tiny Cooper from his birth and childhood to his quest for love and his infamous eighteen ex-boyfriends.

David Levithan is the New York Times bestselling author of many novels for young readers including Every Day, Will Grayson, Will Grayson (with John Green), Invisibility (with Andrea Cremer) and Nick and Norah's Infinite Playlist (with Rachel Cohn), which was turned into a feature film. He's the editorial director of Scholastic Press, and has edited hundreds of books including the mega-hits The Hunger Games and Shiver. David lives in Hoboken, New Jersey.

There are 256 pages in this book. This book was published 2015 by Penguin Books Ltd .

Rachel Cohn and David Levithan are New York Times bestselling authors of YA fiction. They have co-written three books including Nick & Nora's Infinite Playlist which was adapted for a film in 2008.