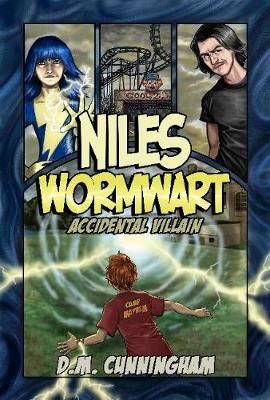 Reviews
Great for age 11-15 years
In the science fair world of ketchup-spewing volcanoes and potato clocks, one boy, Niles Wormwart, plans to alter the history of science fairs with his time travel wristwatch based on Nikola Tesla's work. Unfortunately, history has different plans for Niles. After Niles blows up his school's science wing with his project, his father, deciding his son needs to make some friends and take a break from his constant experiments, sends unsuspecting Niles off to the mysterious Camp Mayhem. The only problem is that Niles' father thinks it's a role-playing camp. Well, it's not. Headed up by the ominous Red Czechmark, Camp Mayhem is ground zero for training the future villains of today. A place for real kids to realize the real villain inside them. Niles sharpens his focus on escape while everyone inside wants him to sharpen his focus on discovering his own dark powers. There's a sinister plot brewing, and Niles is dead in the middle of it. Thrust into a world he only thought existed in comic books. Niles discovers his true potential inside the walls of Camp Mayhem-the potential to become the darkest of evils or stay true to his good-hearted roots.

There are 193 pages in this book. This book was published 2014 by Spencer Hill Press .