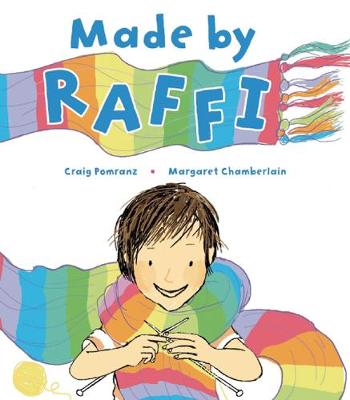 Raffi is a shy boy who doesn' t like noisy games and is often teased at school. But when he gets the idea of making a scarf for his dad' s birthday he is full of enthusiasm, even though the other children think it is girly to knit. Then the day draws near for the school pageant, and there is one big problem - no costume for the prince. And that' s when Raffi has his most brilliant idea of all - to make a prince' s cape. On the day of the pageant, Raffi' s cape is the star of the show.

This book has been graded for interest at 6-9 years.

There are 40 pages in this book. This is a picture book. A picture book uses pictures and text to tell the story. The number of words varies from zero ('wordless') to around 1k over 32 pages. Picture books are typically aimed at young readers (age 3-6) but can also be aimed at older children (7+). This book was published 2015 by Frances Lincoln Publishers Ltd .