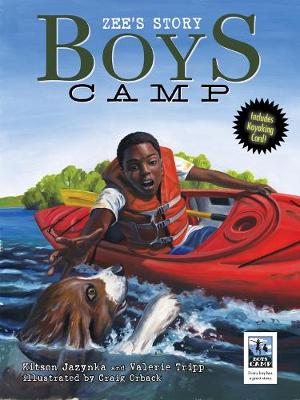 Reviews
Great for age 6-11 years
Who are the two funniest guys at Camp Wolf Trail? Will 'n' Zee no question! The best buddies have emailed all winter long, and now they're back at camp, with millions of great ideas for practical jokes and more than a few big surprises to spring on their fellow campers and counselors. Will and Zee are a trickster team of two. They're partners-in-pranks, a dynamic duo, a famously hilarious pair.

At first, all the mayhem and mischief they cause is a big success. Who'd have guessed that a stuffed octopus, toilet paper, and pies could be combined so comically? Will and Zee's twist on a Camp Wolf Trail tradition is brilliant and means that they're rewarded with the privilege of doing Dead Man's Dive off Big Boulder into O'Mannitt's Cove. They're sure their next triumph will be finding the camp's best-kept secret: the location of Hidden Falls. But when Zee tries to include other guys in the searching, plotting. planning, and fun, Will gets mad, and their friendship blows up. Zee must face his scariest, most dangerous crisis on his own while on a kayaking trip, and for a while, it looks like all is lost. Will Zee be able to save Cookie's life and rescue his friendship with Will, too? Is this the end of Will 'n' Zee? Must Hidden Falls remain hidden? One thing's for sure: Zee will have an adventure-packed summer at Camp Wolf Trail!

Sky Pony Press, with our Good Books, Racehorse and Arcade imprints, is proud to publish a broad range of books for young readers picture books for small children, chapter books, books for middle grade readers, and novels for young adults. Our list includes bestsellers for children who love to play Minecraft; stories told with LEGO bricks; books that teach lessons about tolerance, patience, and the environment, and much more. While not every title we publish becomes a New York Times bestseller or a national bestseller, we are committed to books on subjects that are sometimes overlooked and to authors whose work might not otherwise find a home.

This book is part of a book series called Boys Camp .

There are 144 pages in this book. This is a chapter book. Publishers market early chapter books at readers aged 6-10 years. This book was published 2015 by Skyhorse Publishing .

Valerie Tripp is the award-winning author of more than 40 books of historical fiction in the American Girl series. She also writes stories, songs, and poems for The Superkids Reading Program, and is a founder and the Editorial Director of Boys Camp. A frequent speaker at schools, libraries, and scout troops, Tripp graduated magna cum laude from the first co-educated class at Yale University in 1973. In 1981, she received a Masters of Education from Harvard, where she focused on reading education. She resides in Silver Spring, Maryland. Craig Orback has illustrated numerous award-winning children's books including The Can Man and Nature's Paintbox . He received his BFA in illustration from Cornish College of the Arts in 1998. Craig attended summer camp just like the boys in Boys Camp and now teaches children's book illustration at local colleges. He lives in Seattle, Washington. Kitson Jazynka is an award-winning freelance writer and children's author. Her work appears regularly in National Geographic Kids , American Girl , and Young Rider magazines, as well as the Washington Post 's KidsPost section. A lifelong horse lover and equestrian, Jazynka currently lives with her family including her two young sons in Washington, DC, and keeps a horse at a stable nearby.