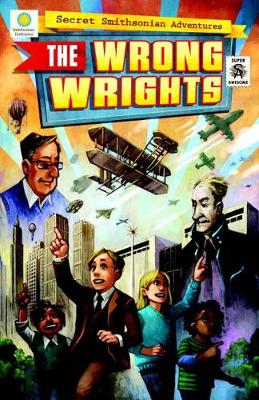 Reviews
The first graphic novel of the Secret Smithsonian Adventures series. Our heroes intervene to save the National Air and Space Museum from Wright brothers interlopers!

Schoolmates Dominique, Eric, Josephine, and Ajay are excited about a field trip to the Smithsonian's National Air and Space Museum. When they get there, however, they find a very different museum than the one they were expecting. Not only is it much smaller, it's filled with balloons, blimps, and dirigibles, many of them with the same logo: BARRIS AIRSHIPS. Where's the Spirit of St. Louis? Where's the Apollo 11 command module? Where's the Wright Brothers' 1903 flyer? With the help of a museum "fabrications specialist," they travel through time to try and restore the Wright brothers to their well-earned place in history. Along the way they also learn about aerodynamics and other aviation principles from a wise-cracking A.I. named Smitty. But the kids' story doesn't end there--something is amiss in the next stop on their Smithsonian tour, the National Museum of Natural History--so they'll have to work together to save history again in volume two.

This book is part of a book series called Secret Smithsonian Adventures .

There are 64 pages in this book. This is a comic book. This book was published 2016 by Smithsonian Books .

STEVE HOCKENSMITH is the New York Times -bestselling author or co-author of 10 books, most recently the Nick and Tesla series of middle-grade mysteries. CHRIS KIENTZ is the writer and producer of the international award-winning Smithsonian Channel television production Raven Tales. LEE NIELSEN is an animator, illustrator, concept artist, and designer.