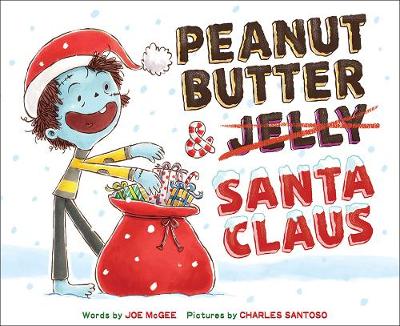 When Santa gets snowed in at the North Pole, it's up to three heroes from Quirkville to save the day-but they're in for an ooey-gooey surprise!

Reginald (the zombie), Zarfon (the alien), and Abigail Zink (the human) are all preparing for Christmas in Quirkville when the terrible news breaks: CHRISTMAS IS CANCELED! Santa is snowed in at the North Pole. The three friends hatch a plan to save the day. They load into Zarfon's spaceship-along with lots of peanut butter for a surprise Christmas delivery to his home planet later on-and head straight for the North Pole. When they arrive, they find that Santa and his elves are trapped, not by snow, but by a marshmallow cream explosion. With a little bit of creativity, a little bit of Christmas spirit, and one big KA-POW!, the pals from Quirkville save Christmas and inadvertently create a delicious treat!

There are 32 pages in this book. This is a picture book. A picture book uses pictures and text to tell the story. The number of words varies from zero ('wordless') to around 1k over 32 pages. Picture books are typically aimed at young readers (age 3-6) but can also be aimed at older children (7+). This book was published 2019 by Abrams .

Charles Santoso has illustrated several picture books, including The Snurtch and I Don't Like Koala . He worked at Animal Logic as a concept artist/art director and was involved in various animated feature film and TV commercial projects. Charles Santoso's work has been exhibited in Sydney and also internationally in North America and France. He currently lives and works in Singapore. Joe McGee holds an MFA in writing for children and young adults from the Vermont College of Fine Arts. His fiction and poetry have been published in both print and online journals, and he is the author of Peanut Butter & Brains . He lives in Frenchtown, New Jersey. Charles Santoso is a concept artist and illustrator currently living in Singapore. His work has been exhibited in North America, Australia, and France.

Christmas And Advent in fiction
Monsters in fiction