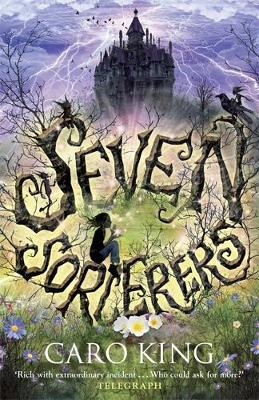 Nin had never liked Wednesdays, but this one took the biscuit. On this Wednesday she woke up to find that it was raining buckets and that her brother had ceased to exist.

Nin realizes she is the only person to remember Toby because whoever took him is about to make her disappear too. Enter Skerridge the Bogeyman, who steals kids for Mr. Strood. With his spindle, he draws all memories of Nin out of her mother's head. She escapes to the Drift, a land filled with the fabulous and the dreadful. What is the sorcerers' secret and will Nin and Toby escape their fate at the House of Strood?

This book was recognised by the Waterstones Children's Book Award.

There are 352 pages in this book. This book was published 2010 by Hachette Children's Group .

Caro King was born in London and raised in Surrey where she now lives with her partner, Kevin. She studied art and now works at the Home Office. Seven Sorcerers came from a rainy lunchtime when she began mapping out the world of the Drift. Skerridge and his waistcoat came later.