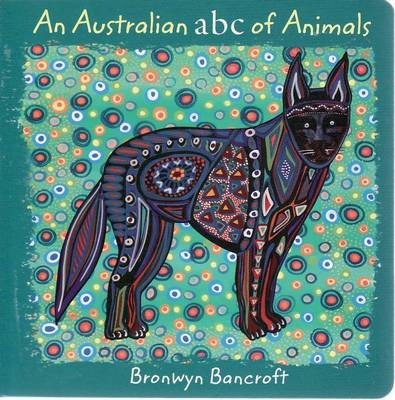 Reviews
Great for age 3-6 years
An Australian ABC of Animals is a lavishly illustrated alphabet book by well-known Aboriginal artist Bronwyn Bancroft. The book is both a delightful introduction to the alphabet, and a unique exploration of Australian wildlife - some familiar, others more unusual - as seen through the eyes of an indigenous artist. Animals include: kangaroo, bandicoot, wombat, echidna, cockatoo, frog and goanna - and many more.

There are 22 pages in this book. This book was published 2009 by Hardie Grant Egmont .

Bronwyn Bancroft is an artist and designer whose artworks have been collected and shown by galleries throughout Australia and around the world. A descendant of the Bundjalung people, Bronwyn studied at the Canberra School of Art, eventually starting Designer Aboriginals, training Aboriginal women in arts and craft. She was one of the founders of Boomalli, the Aboriginal Artists' Cooperative, was a board member of the Council of the National Gallery of Australia, has been Chair of the Visual Arts and Crafts Committee for the NSW Ministry of the Arts, and is a well-known speaker on Aboriginal art and advocacy issues. Since 1993 Bronwyn has authored and illustrated many award-winning children's books, including Possum and Wattle and Patterns of Australia.