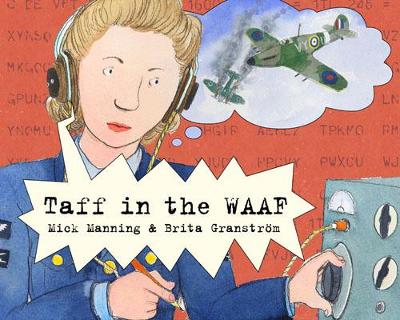 Taff in the WAAF

Mick Manning's mother was a young woman in Wales at the outbreak of World War II. This fascinating book, a companion to the the very successful Tail-End Charlie about Mick's father's life in the RAF in World War II, tells her story using the same innovative non-fiction narrative style. At the outbreak of war and the start of food rationing, she left school aged 14 to work in a local greengrocer's shop. Later joining the WAAF (the Women's Auxiliary Air Force), she became a wireless operator and eventually a Y service listener for the secret signal decoding operation at Bletchley Park where the famous German Enigma Code was cracked. The book also looks at other essential women's roles during the war including the ATS (Auxiliary Territorial Service), the Wrens (Women's Royal Naval Service), Land Army, Fire Service etc, and a wide range of aspects of life affected by the war effort. Simply written and using speech bubbles and captioned illustration boxes of artefacts and documents from the period, this is a dramatic and engaging introduction to its subject.

This book was recognised in the Key Stage 2 category by the Ea English 4-11 Picture Book Awards.

This book is suitable for Key Stage 2. KS2 covers school years 4, 5 and 6, and ages 8-11 years. A key stage is any of the fixed stages into which the national curriculum is divided, each having its own prescribed course of study. At the end of each stage, pupils are required to complete standard assessment tasks.

There are 40 pages in this book. This is a picture book. A picture book uses pictures and text to tell the story. The number of words varies from zero ('wordless') to around 1k over 32 pages. Picture books are typically aimed at young readers (age 3-6) but can also be aimed at older children (7+). This book was published 2013 by Frances Lincoln Publishers Ltd .