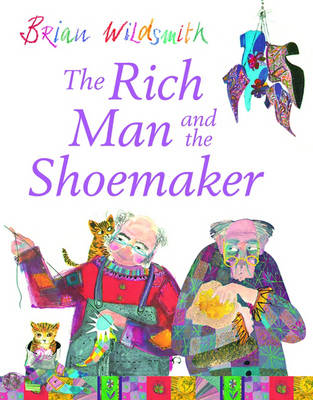 Rich Man and the Shoemaker

Reviews
Great for age 3-6 years
A happy shoemaker - who sings beautifully while he works - is stopping his wealthy but miserable neighbour from sleeping. So the rich man hatches a plan to put an end to the shoemaker's sunny disposition. But how can a bag of gold coins steal the music from the shoemaker's life? The simple message of this La Fontaine fable - that cheerfulness is worth more than any amount of accumulated riches - is gloriously told in this lovely picture book from Brian Wildsmith, an internationally acclaimed writer and artist for children. His simple words and sumptuous illustrations bring a freshness to this timeless fable and the stunning new cover design and imaginative interior typography will delight a whole new generation of young Wildsmith fans.

There are 32 pages in this book. This is a picture book. A picture book uses pictures and text to tell the story. The number of words varies from zero ('wordless') to around 1k over 32 pages. Picture books are typically aimed at young readers (age 3-6) but can also be aimed at older children (7+). This book was published 2008 by Oxford University Press .