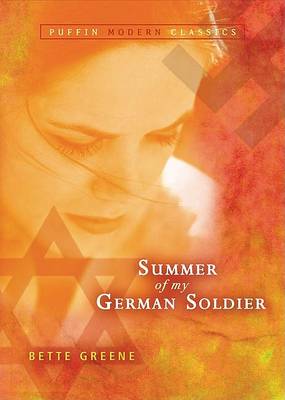 Summer of My German Soldier

The summer that Patty Bergen turns twelve is a summer that will haunt her forever. When her small hometown in Arkansas becomes the site of a camp housing German prisoners during World War II, Patty learns what it means to open her heart. Even though she's Jewish, she begins to see a prison escapee, Anton, not as a Nazi, but as a lonely, frightened young man with feelings not unlike her own.

In Anton, Patty finds someone who softens the pain of her own father's rejection and who appreciates her in a way her mother never will. While patriotic feelings run high, Patty risks losing family, friends -- even her freedom -- for this dangerous friendship. It is a risk she has to take and one she will have to pay a price to keep.

There are 240 pages in this book. This book was published 2011 by Penguin Books Ltd .

Like Beth Lambert, Bette Greene grew up in a small town in Arkansas. Her first novel, Summer of My German Soldier , won unanimous critical acclaim and became an immediate best-seller. Bette Greene lives in Brookline, Massachusetts.