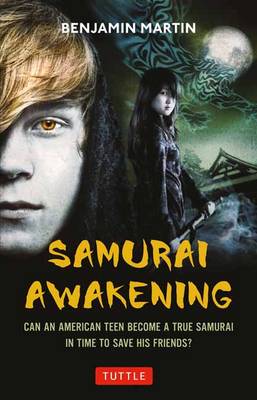 Samurai Awakening: Can an American Teen Become a True Samurai in Time to Save His Friends?

Reviews
Great for age 12-18 years
**Winner of the 2013 SCBWI Crystal Kite Award** David Matthews is having a rough time. Being a teenager is bad enough, but when he picks up and moves to Japan for a year, with barely any knowledge of the language or social behaviours of Japanese teenagers, things go from bad to worse. Until one day, David attends a temple ceremony and finds himself possessed by a Japanese god. Suddenly, he can understand and speak Japanese. He has unbelievable new powers, including the ability to shift into a tiger, and a powerful sword he can materialize at will from its sheath; his body. But nothing comes for free, and these changes bring David face-to-face with the most terrifying creatures of Japanese legend; vengeful okami, demonic oni and terrifying ghostly yurei. Trained by his host family, famous sword-makers and the keepers of an ancient secret entrusted to their family by the first Emperor of Japan, David must fight desperately to save his host sister from a hoard of Japanese monsters. Evil has returned to Japan, and David must overcome his own insecurities if he is to save her and become a True Samurai; the protector of Japan.

There are 320 pages in this book. This book was published 2016 by Tuttle Publishing .

Originally from Arizona, Ben Martin currently lives in Japan. He was a semi finalist in the 2011 Amazon Breakthrough Novel Contest with the manuscript for Samurai Awakening , which placed in the top 1% in the Young Adult category.