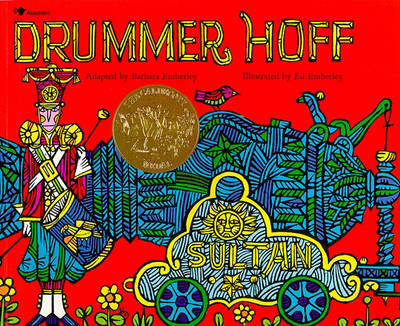 Reviews
Great for age 3-9 years
Ed Emberley won the 1968 Caldecott Medal for his bold illustrations for Barbara Emberley's jaunty adaptation of the cumulative folk song about seven soldiers who build a magnificent cannon and Drummer Hoff, who fires it off.

There are 32 pages in this book. This is a picture book. A picture book uses pictures and text to tell the story. The number of words varies from zero ('wordless') to around 1k over 32 pages. Picture books are typically aimed at young readers (age 3-6) but can also be aimed at older children (7+). This book was published 1972 by Simon & Schuster .

Ed Emberley is the Caldecott Award-winning author of the popular Drawing Book series. Barbara and Ed Emberley's collaborations include the Caldecott Honor Book One Wide River to Cross. Ed's books have also been honored on the New York Times's annual Best Illustrated Books List. The Emberleys live in Ipswich, Massachusetts.