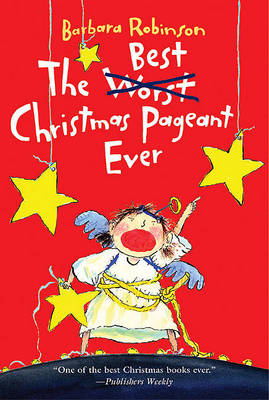 Reviews
Great for age 7-13 years
The Herdman children, who enjoy terrorizing their classmates, volunteer to play the main characters in the Sunday school Christmas pageant.

There are 128 pages in this book. This book was published 2005 by Turtleback Books .

I grew up in North London and attended Camden School for Girls. As a child visits to Hampstead Heath cultivated a love of nature and the outdoors which has remained with me throughout my life. Accordingly I attended a rurally located Teacher Training College in Berkshire and became a primary school teacher. My first teaching position was in North London and then following my marriage I taught in Farnborough, Hampshire. This was followed by a brief position in Derbyshire. My last position before emigrating to Canada was in Andover, Hampshire. I emigrated to Canada in 1966 and lived in Montreal until the mid 1980s. My three children were born there and following my divorce I attended McGill University, studying for a B. Ed, plus a Diploma in Special Education. I also completed two years of postgraduate studies in Educational Psychology which incorporated teaching a course for the University. In Canada I taught in the Montreal area initially at Otterburn Park and then in Laval before my first child was born. In the early years of my children's education I became actively involved in teaching and organising community nursery schools. This was followed by approximately seven years of teaching special needs to adolescents in crisis. I also taught briefly in the Saguenay region of northern Quebec and also in Ottawa. My love of the outdoors became focussed on ski-ing, canoeing and camping in both Canada and the USA. On my return to England I taught in London, primarily in multicultural primary schools in Enfield and Wood Green. I retired from teaching and moved to the north east of England almost two years ago. I travel frequently to visit my children in Canada, Singapore and the USA. I have also started writing fiction for children, which has been a long held ambition. I currently have completed four books which are in the process of hopefully being published. I try to incorporate an awareness of nature in the stories I write. Barbara Robertson