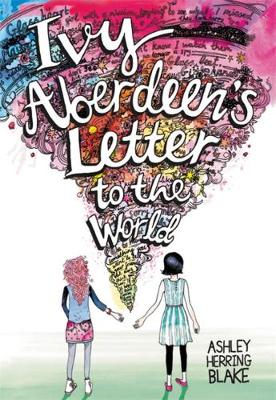 Ivy Aberdeen's Letter to the World

When a tornado rips through town, twelve-year-old Ivy Aberdeen's house is destroyed and her family of five is displaced. Ivy feels invisible and ignored in the aftermath of the storm--and what's worse, her notebook filled with secret drawings of girls holding hands with girls has gone missing.

Mysteriously, Ivy's drawings begin to reappear in her locker with notes from someone telling her to speak openly about her identity. Ivy thinks--and hopes--that this someone might be her classmate, another girl for whom Ivy has begun to develop feelings.

Spoiler: In the end, the drawings and messages are being sent by Ivy's best friend, Taryn, and unfortunately the girl Ivy has feelings for doesn't return them--but the novel ends on a tone of hope for Ivy and her identity.

This sweet, tender novel has a strong voice in the vein of The Thing About Jellyfish, strong potential for the School & Library market, and is an award contender.

This book was recognised by the Stonewall Book Award.

Ashley Herring Blake lives in Nashville, Tennessee, with her husband and two sons.