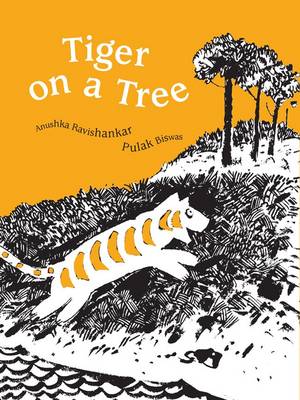 Tiger on a Tree - PB

Reviews
Great for age 3-7 years
Tiger Tiger on a tree Is it true? Can it be? Did he fly? Did he flee? Did he fall and hurt his knee? Did he cry? Did he plead? If you want to know: read The tale of a wild tiger cub who wanders into an Indian village, and the reactions he encounters from the stunned village inhabitants. The art, verse and typography run and bounce off the page, drawing both the curious child and the quizzical adult into the lively world of the book. Now translated into eight languages and having sold 40,000 copies worldwide, this is the first softcover edition of a quintessential Tara title.

There are 40 pages in this book. This is a picture book. A picture book uses pictures and text to tell the story. The number of words varies from zero ('wordless') to around 1k over 32 pages. Picture books are typically aimed at young readers (age 3-6) but can also be aimed at older children (7+). This book was published 2014 by Tara Books .

Anashuka Ravishankar, author of over ten books of verse, fiction and non-fiction, is considered a pioneer of the Indian English nonsense verse, and has written several such successful volumes for Tara, including Anything but a Grabooberry and Catch that Crocodile! Pulak Biswas, one of the most senior children's book illustrators in India, has worked on several books for Tara, including HenSparrow Turns Purple and Catch That Crocodile. He considers Tiger on a Tree his favourite among all the books he has ever illustrated. Anushka Ravishankar is a mathematics graduate who has made a name for herself internationally as an Indian children's writer, with over ten books of verse, fiction and non-fiction. She can be said to have pioneered the Indian English nonsense verse form and brought it to international attention. Christiane Pieper is a German illustrator for whose art delights in drama, movement and whimsical expressions.