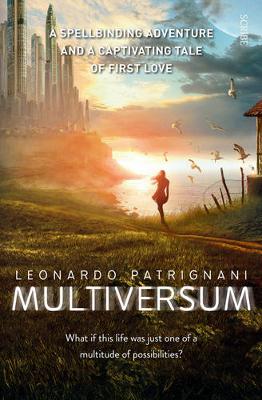 Reviews
Great for age 12-18 years
A spellbinding adventure and a captivating tale of first love. Alex and Jenny are sixteen. He lives in Milan; she, in Melbourne. For the past four years, they have glimpsed each other at random moments, while they are both unconscious - a telepathic communication that occurs without warning. During one of these episodes, they manage to arrange a meeting. But on the day, though they are standing in the same place at the same time, each of them cannot see the other. This leads them to a startling discovery: they live in different dimensions. In Jenny's world, Alex is someone else. And in Alex's world, Jenny died at the age of six. As they try to find each other, the Multiverse threatens to implode and disappear, but Jenny and Alex must meet - the future of the Earth depends on it.

This book has been graded for interest at 15+ years.

Leonardo Patrignani was born in Moncalieri, Italy, in 1980. A songwriter, voice actor, and Stephen King fan, he has been writing since the age of six. Multiversum is his first book, and rights to the novel have been sold in eighteen countries. Antony Shugaar is a writer and literary translator working from Italian and French. He has published articles in The New York Times, The Washington Post, and The Boston Globe in recent years. He is an editor-at-large for the journal Asymptote and is currently at work on a book about translation for the University of Virginia Press.