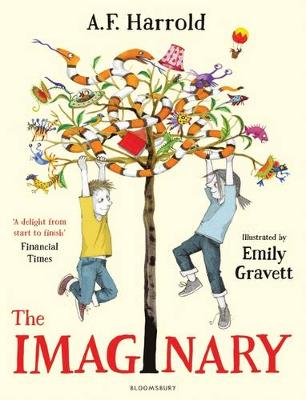 Reviews
Great for age 8-12 years
An extraordinary tale of love, loss, imagination and not really being there, for fans of Roald Dahl and Neil Gaiman. Rudger is Amanda's best friend. He doesn't exist, but nobody's perfect. Only Amanda can see her imaginary friend - until the sinister Mr Bunting arrives at Amanda's door. Mr Bunting hunts imaginaries. Rumour says that he eats them. And he's sniffed out Rudger. Soon Rudger is alone, and running for his imaginary life. But can a boy who isn't there survive without a friend to dream him up? A brilliantly funny, scary and moving read from the unique imagination of A.F. Harrold, this beautiful book is astoundingly illustrated with integrated art and colour spreads by the award-winning Emily Gravett.

There are 224 pages in this book. This book was published 2015 by Bloomsbury Publishing PLC .

Emily Gravett is an award-winning children's author and illustrator who lives in Brighton, England. She is the winner of the Kate Greenaway Medal for Wolves and Little Mouse's Big Book of Fears. A. F. Harrold is an English poet (1975 - present). He writes and performs for adults and children, in cabaret and in schools, in bars and in basements, in fields and indoors. He was Glastonbury Festival Website's Poet-In-Residence in 2008, and Poet-In-Residence at Cheltenham Literature Festival in 2010. He won the Cheltenham All Stars Slam Championship in 2007 and has had his work on BBC Radio 4, Radio 3 and BBC7. He is active in schools work, running workshops and slams and doing performances at ungodly hours of the morning, and has published several collections of poetry. He is the owner of many books, a handful of hats, a few good ideas and one beard.